Kingdom of Bhutan at a glance.

Bhutan's early history is steeped in mythology and remains obscure.

Bhutan's rich cultural and heritage make unique in the world.

Bhutan’s development objective is based on Gross National Happiness.

The people of Bhutan are a rich mosaic of lifestyles and languages.. 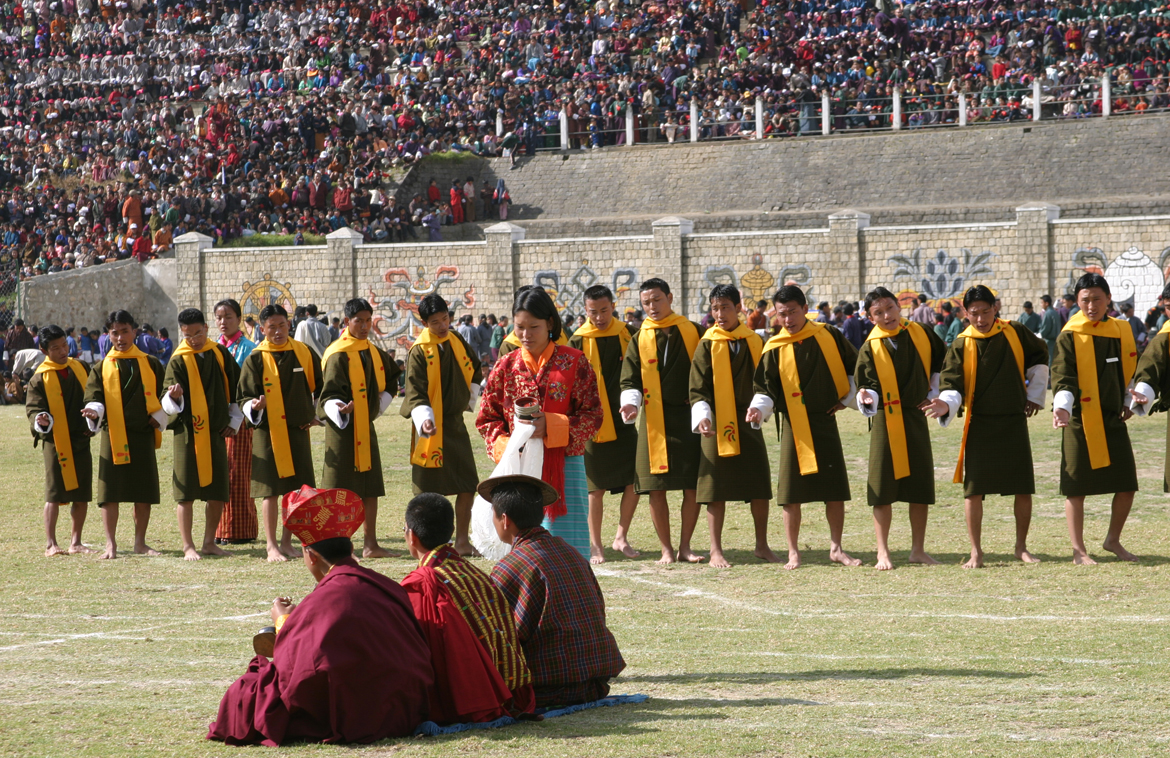 People in Bhutan can be divided in three broad ethnics group – Sharchops, Ngalops and Lhotshampas.

The Sharchops who live in the eastern regions of Bhutan are considered to be the earliest major group to inhabit Bhutan. Sharchops translated as “people of the east”

Ngalops are the descendants of Tibetan immigrants who came to Bhutan in 8th and 9th century A.D settling primarily in the west.

The third group is known as Lhotshampas. They represent the Nepali speaking ethnic group. They started migrating in the 19th and 20th century and live in the southern foothills of Bhutan. They are predominantly Hindu.

Predominantly Buddhist, the Bhutanese people practice Drukpa Kargyud sect of Mahayana Buddhism. Monks and nuns play an important role in the daily lives of Bhutanese people. They perform ceremonies by preserving the ancient culture and promote the teachings of wisdom and compassion.   You can practically see every Bhutanese home with a room called ‘choeshum’ for daily religious practice.The faith of Bhutanese can be measured by the temples, monasteries and stupas built in every corner of the country for their daily worship.

Bhutanese food mainly consists of meat, rice and vegetables. People in Bhutan love chilies. The most popular dish in Bhutan is called ‘Ema Datse’ which is made from cheese and chilies.

Chang, a local beer made from rice is a common drink especially in the villages.

The folk dances, ancient music and the mask dances during the religious festivals called Tshechu are some of the unique and distinct cultural identity Bhutan has preserved over the years.

The national language is Bhutanese (Dzongkha), one of 53 languages in the Tibetan language family. The script, here called Chhokey (“Dharma Language”), is identical to classical Tibetan. In the schools English is the medium of instruction and Dzongkha is taught as the national language. Ethnologue lists 24 languages currently spoken in Bhutan, all of them in the Tibeto-Burman family, except Nepali, an Indo-Aryan language. Until the 1980s, the government sponsored the teaching of Nepali in schools in Southern Bhutan. However, after the armed uprising in the south, Nepali was dropped from the curriculum. The languages of Bhutan are still not well-characterized, and several have yet to be recorded in an in-depth academic grammar. Before the 1980s, the Lhotshampa (Nepali-speaking community), mainly based in southern Bhutan, constituted approximately 30% of the population.

Dzongkha is partially intelligible with Sikkimese and spoken natively by 25% of the population.Tshangla, the language of the Sharchop and the principal pre-Tibetan language of Bhutan, is spoken by a greater number of people. It is not easily classified and may constitute an independent branch of Tibeto-Burman. Nepali speakers constituted some 40% of the population as of 2006. The larger minority languages are Dzala (11%), Limbu (10%, immigrant), and Kheng (8%). There are no reliable sources for the ethnic or linguistic composition of Bhutan, so these numbers do not add up to 100%.